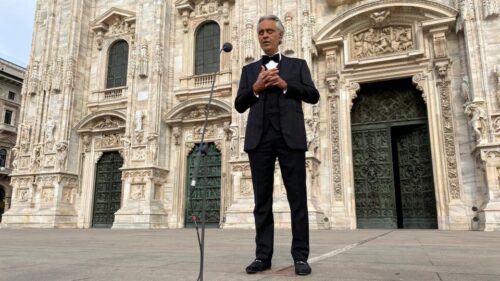 Do you remember the viral video that had Andrea Bocelli singing in an empty cathedral? I do, I watched it in the spring when Italy was in the news. It was pretty intense. Here is the video if you haven’t watched it.  Anyway, he made some news again. The singer said he felt violated during Italy’s lockdown and that he felt ‘humiliated and offended’.

Here is what he said:

“I looked at reality and I saw that things were not as we were being told. When I started to express doubts about the seriousness of this so-called pandemic, the first to attack me were my children who told me to think about Tosca, because you don’t understand viruses.

He also was diagnosed with covid, but instead of following protocol, he spent time outdoors and took vitamin D and fully recovered with no issues.

He saved most of his outrage for the Italian government approach to reopening schools.

“I have an 8-year-old daughter and it’s unthinkable that these children will have to go to school divided by a piece of plexiglass and hidden behind a mask”.

“It’s unthinkable that schools were closed so quickly, and with the same speed nightclubs were reopened, where young people go not to learn, but to disperse their brains.”

“[My intent] was to send a message of hope for a near future in which – children first and foremost – can find a sense of normality again and hope to live ‘as children’, playing with and hugging one another, as they should at their age, and to be able to grow up happy and healthy.”